bonspeed Wheels might be well known for the finest forged billet wheels on hot rods and trucks, but they also are great on muscle cars too.  In fact the owners of bonspeed Brad and Michael each collect muscle cars and love the big horsepower of the 1960s and 1970s.
This year bonspeed is an associate sponsor of The Forge Invitational in Bristol, TN.  Check out the website and if you can make it be sure to attend.
THE FORGE CLASSIC
NEW MUSCLECARS OUTSIDE RARE MUSCLECARS INSIDE
MUSEUM TYPE SETTING
SCROLL DOWN FOR FURTHER INFO
OCTOBER 1 - 2  2010
FRIDAY 10AM - 8PM  SATURDAY 10AM - 6PM
Open to the public $10 admission chance to win door prizes
MARRIOTT MEADOWVIEW RESORT & CONVENTION CENTER
1901 Meadowview Parkway Kingsport 37660
Kingsport / Bristol Tennessee
Visit the event website: The Forge Classic
Posted by bonspeed boys at 10:30 AM No comments: 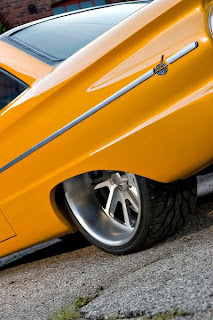 The new bonspeed Feature Car blog is a great place to visit every week! With great photos and information you will see some of the best vehicles that have bonspeed wheels.

It is also a great resource to see what fitments work, because our blog will show the vehicle and tell you what size and style wheels it has bolted underneath.

CHECK OUT THE BLOG NOW! 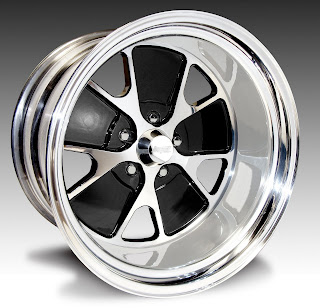 The newest wheel from the bonspeed factory is the "PONY". This retro muscle car inspired wheel gives Mustang enthusiasts a wheel they can love. Now any Mustang guy can have a
wheel that allows for better handling and bigger rubber.

Inspired by early Mustang GT rims the "PONY" is offered in both standard and soft lip outer hoops. The wheels will are available in diameters 17"-22" and widths of 7"-15". Like all bonspeed wheels they are made in the USA from 6061 T6 aircraft grade aluminum and individually machined from solid billet forgings. These two-piece wheels are the finest in fit, finish and quality!

Each set is made-to-order and built to specially fit to your vehicle; call toll free for ordering and prices 1.888.999.7258.

NOTE: All bonspeed wheels come standard with a a high luster chrome like polished finish. The wheel featured above is shown with our optional Color Forged© black accent.

VISIT: bonspeed Wheels WEBSITE
Posted by bonspeed boys at 11:43 AM No comments:

Chickenfoot Shows Added for this Weekend! 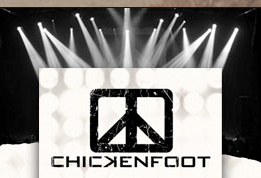 bonspeed co-owner and full-time rock star is heading to the stage this weekend with Chickenfoot. Michael Anthony, Sammy Hagar, Joe Satriani and Chad Smith will be playing in So. Cal. and in Lake Tahoe.

So here are your orders; buy some tickets, go to the show, give a bonspeed shout out to the guys and have too much fun! Rock-On, Chickenfoot and Roll-On, bonspeed.

Dixon Does It Again! Wins the NHRA U.S. Nationals in Indy 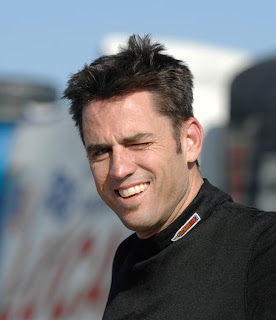 Larry Dixon arrived at the NHRA U.S. Nationals with a 30 point lead in the top fuel championship chase. The lead was his reward for being #1 for the first portion of the 2010 season.

The U.S. Nationals in Indianapolis is known as the "Big Go" and thought of as the Superbowl of drag racing. With a tough field and every driver and team wanting the edge, Indy is important. Dixon was qualified #1 and used that momentum towards the win.

Dixon and the Al-Anabi team have now reached a milestone of 10 finals in a single season and this his 102nd final places him atop the record books.

Way to go Larry! We know it is because he rides on bonspeed wheels and wears a bonspeed/Bonneville watch! 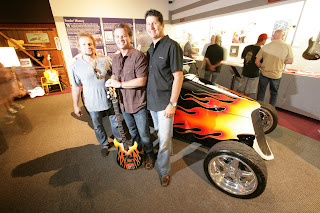 The bonspeed boys Michael Anthony, Brad Fanshaw and Mark Cilani attended the premier opening of "Axes & Axles: The Art of Building Cars and Guitars" today; September 1, 2010. The exhibit which officially opens September 4, 2010 at the NHRA Museum in Pomona, California is a tribute to cars, guitars and the musicians who love them. The custom tribute also features the art of hot rods and the custom guitars that rockers build to wow the audience. Michael Anthony of Van Halen and Chickenfoot fame is a featured artist with one of the hot rods from his collection and two of his guitars being shown. 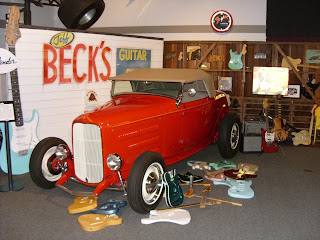 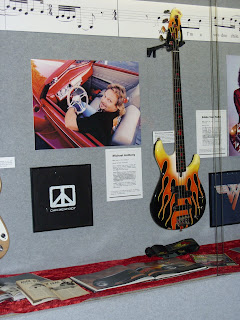 Surrounding the hot rods and customs are showcase displays of the guitars that were played by the hard rockin' hot rodders and some very special custom axes. The bass shown above is one of Michael's favorites and shows the wear of years on the road and in the studio with Van Halen. The paint also matches his Fire Roadster!

In another case is Michael's billet bass that was designed and conceived by Brad Fanshaw; then President and business partner of hot rod legend Boyd Coddington. Michael and Brad were on a trip to Cobo San Lucas, Mexico when the idea was discussed and the plans were layed. Upon returning to the states, Brad talked his partner (Boyd) into having the shop spend hundreds of man hours creating the hot rod bass guitar. The ideas created by Brad and Michael were taken to shop employee Chip Foose who was given the concept and direction so he could illustrate the idea.

The bass was an instant hit, being discussed on The Tonight Show with Jay Leno, written about in newspapers world wide and many magazines. The guitar has even been displayed in the Hard Rock Cafe. This bass epitomizes the cross of cultures, as it features every element of a hot rod.

The Axes & Axles exhibit is at the NHRA Museum in Pomona, California, for information visit www.museum.nhra.com. Exhibit opens during the L.A. County Fair. Museum observes Fair's days and hours of operation. Fair admission is required for entrance to the Museum including Fair parking (Sept. 4 through Oct. 3). Exhibit will be open during regular Museum days and hours Oct. 4 through June 30, 2011.


Posted by bonspeed boys at 5:45 PM No comments: