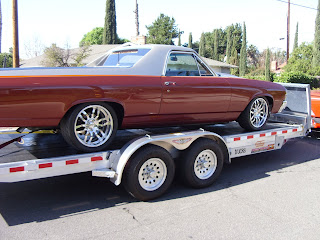 Way back in 1996 the bonspeed El Camino was emblazoned across the cover of Car Craft. The car was the very start of the pro-touring trend in styling. The car had exotic (by 1995 standards) 18" wheels and oh my gosh four wheel disc brakes!

It did feature a quick steering box, a chassis built at the original Hot Rods by Boyd and a motor and trans that had been smoothed and painted body color. This El Camino with the Big Block and coil-over suspension was exotic for the day.

Fast-forward to 2009 and the car looks nice but it lacks some serious hardware underneath. bonspeed Wheels has teamed with Travis Noack, the editors of MuscleCar Power to remake the car and bring it back to cover car status. The El Camino will get among other parts BAER 6-piston brakes with 14" rotors front and back, Hotchkis tubular A-arms, sway bar and a complete suspension tune-up, shorty headers and new exhaust and of course a
new set of bonspeed Wheels. The wheels will be a 19" front and 20" rear set of our newest style, the "VinSpeed".

Follow the build in MuscleCar Power magazine beginning with the August issue (on sale date: May 26, 2009) and here at the bonspeed blog. You can even see a video of the of the suspension install now at Hotchkis.net. 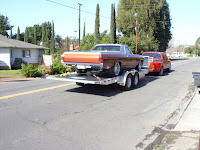 (LEFT): Travis Noack from MuscleCar Power magazine loaded the El Camino on his H&H "Speedloader" trailer and hauled it off to Hotchkis for a full front suspension update.


bonspeed Wheels: www.bonspeedWheels.com
See the video: http://www.hotchkis.net/
Read the Magazine: MUSCLECAR POWER
Posted by bonspeed boys at 9:00 AM No comments: 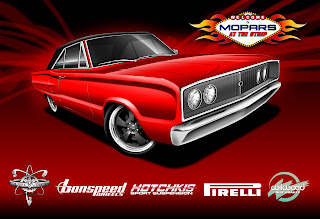 The Mopars at the Strip event will be held in Las Vegas, Nevada on March 20-22, 2009. This annual event is a mecca of cars for the Mopar fanatic. Every year the cars converge on Vegas and tear up the strip and shine in the desert sun. This is also an event that we wait to see what new parts and cool Mopar cars will emerge for the new year. We hear that the guys from Mr. Norm’s are bringing something pretty cool and it will feature bonspeed wheels.

The Mopars at the Strip event is also known for building some cool Chrysler, Dodge or Plymouth during the show. Again in 2009, Steve Strope from Pure Vision will lead the build-up. This year the car is a 1967 Cornet and bonspeed Wheels along with Hotchkis, Pirelli and Wilwood will contribute to making the Cornet happen!

Posted by bonspeed boys at 6:23 PM No comments: