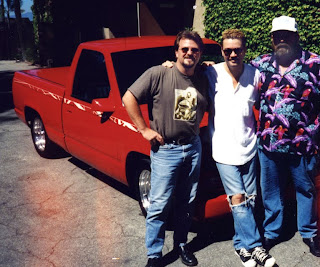 I heard recently that the truck that Boyd Coddington and I designed and built for Eddie Van Halen was being resurrected. Duane Mayer at American Hot Rods called to ask if I knew anything about the truck that was built at Hot Rods by Boyd for Eddie? I replied that I did and where was it? He informed me that someone had called about restoring it and they were bringing it to his shop.

This was one bad ass sport truck with Corvette suspension, drive train and the full Boyd sport truck treatment. We even made one-off wheels that replicated Ed's stripe pattern. The side stripe not only had his stripes but, it ends with the shape of a guitar head. I do remember driving the truck through Los Angeles and many a Van Halen fan strained to see through the tinted windows. They knew what that stripe represented and they thought maybe the guitar god was behind the wheel.

Somewhere I have a photo of Eddie and I with the similar, but less modified giveaway truck in the Petersen Publishing photo studio. If I find it we will post that at a later date.

It is great to see the truck is being granted another life, but in my opinion a restoration instead of modification would have been better and more valuable!

PHOTO ABOVE: Brad Fanshaw, Eddie Van Halen and Boyd Coddington the day we delivered the truck at the 5150 studio. 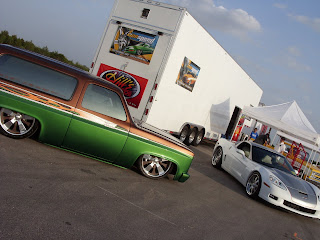 bonspeed Wheels teamed with Hill's Hot Rods and braved the Texas July heat to invade this year's "Texas Heat Wave". The name was true to form and the sun was bright with Texas sized heat all weekend. 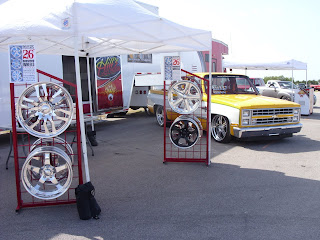 The show was great and featured all kinds of cars and trucks. Yes, if you look at that sign Austin was the debut of 26" bonspeed wheels!

Thanks to Jason Hill and the gang from Hill's Hot Rods they hosted us and shoed us the best place for Mexican food in Austin! 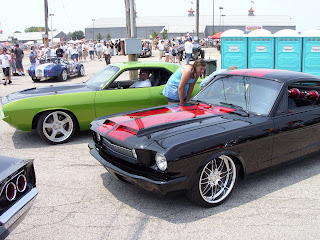 Goodguys in Columbus, Ohio is always the location for the debut of many a top car! bonspeed's President; Brad Fanshaw walked in the gates on Friday and in the HOT staging lanes were two muscle cars wearing bonspeed's. These two cars were waiting their turn for the timed autocross, a must for competitors in the "Street Machine of The Year" competition.

The otrageously nice black Mustang was brought from California by Justin Padfield/Scott's Hot Rods. This car that features bonspeed "T-Rex" wheels and a "T-Rex" steering wheel was built for Mike Dingman.

You can see a feature on that Lime Green Mopar in the background in this months "Muscle Car Power". The cover car features bonspeed "Atom-Bomb" wheels. 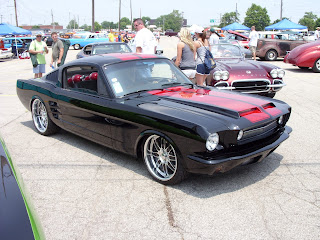 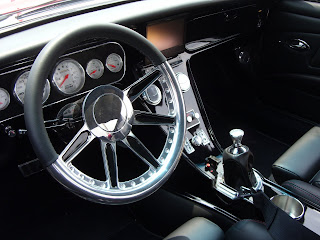 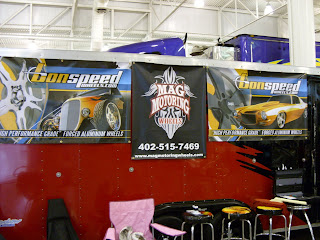 The Summer always means that you will find bonspeed Wheels traveling the USA and attending the best car shows! One show we recently attended was the GoodGuys Heartland Nationals in Des Moines, Iowa on July 4th weekend.

bonspeed's President attended to support one of our dealers; MagMotoringWheels.com of Omaha, Nebraska. Mark and Damon Grimes the leaders at MAG had a great booth and brought two cars to represent the bonspeed wheel line. 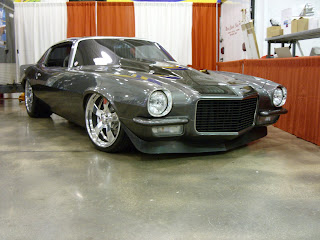 At the booth was one of the baddest 1972 Camaro pro-street cars you will ever find! The car was built by MAG Motoring and has 18x8 bonspeed Huntington wheels in the front and 20x12 bonspeed Huntington wheels in the back. This killer ride has a full Air-Ride suspension and a big block for power.
Outside the guys from MagMotoringWheels.com rolled in a 1 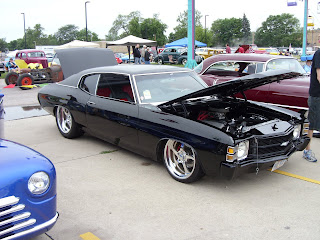 971 Chevelle with a bunch of cool modifications including the bonspeed Malibu wheels 18x8 front and 20x10 rear. This car was also constructed by MAG, these guys know how to build cars that have the stance!