Scottsdale in January is Car Mecca! 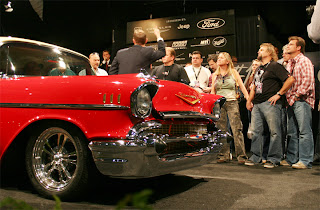 It's January and that means that the "bonspeed boys" and our friends are headed to Scottsdale, Arizona. Scottsdale in January is like Mecca for car guys, it has something for everyone.

There are so many car auctions you begin to wonder just how many rare cars are out there. You also realize that almost every enclosed transport company has there fleet parked in town.

From January 13th to the 21st there is the Russo and Steel auction, RM Auction, Kruse and the Barrett-Jackson event. Between these events you can find a car, an atmosphere and some fun for just about any like.

Brad Fanshaw, bonspeed's President has been attending the Barrett-Jackson event for over 20 years. Brad began trekking out to the event when he was young and could only dream of the cars that crossed the block. Now years later he has transacted over 12 vehicles at the event.

It was five years ago that Brad and his wife Charlotte introduced Michael Anthony (bonspeed co-owner) and his wife Sue to the Barrett-Jackson extravaganza. Since then they have not missed a year and have bought two cars; a GT 500 Shelby for Sue and the '57 Nomad above.

The great thing about the auction week in Arizona is you don't need to buy or sell to have fun. These events are cars shows, excitement and the car world is in attendance. So plan a trip to Scottsdale and find us, the "bonspeed boys" and say hello!

PHOTO ABOVE:
Sue, Michael their daughter Elisha and Brad on stage at Barrett-Jackson 2006. Michael was the winning bidder on this super clean 1957 Chevrolet Nomad custom. Our Friend Jim Peterson is hiding behind Brad while Mike Riley (in black T in front of auctioneer) is considering out-bidding Michael for the car.
Posted by bonspeed boys at 1:29 PM No comments:

In case you missed it over the holiday's the "bonspeed boys" were featured on Speed TV! The segment was part of the Barrett-Jackson event coverage on their show "Life on the Block" entitled; "ROCK-ON!

The show aired on December 18th and again several times including Christmas day and New Year's day. The crew at Speed TV followed Michael Anthony and Brad Fanshaw, the owners of bonspeed as they sold five of their cars and helped Sammy Hagar sell his prized Shelby GT 500.

Speed's producer Jana DeHart did a fantastic of job capturing the excitement and crazy tension of moving almost $575,000 worth of cars across the block one after another!

Watch for re-airings of the show throughout the year on Speed TV! You can also check our bonspeed website as we will post the air times as we learn of them.