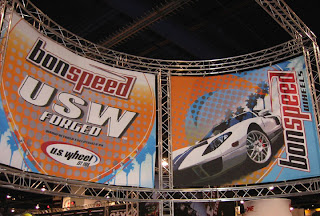 The SEMA show is a massive car Mecca and you must do more than just be there. Make a statement, be bold and be seen...that is what bonspeed and the bonspeed boys did at SEMA 2007! The new booth seen above was created by our in-house graphic guru "RM" and you could see it for rows and rows. 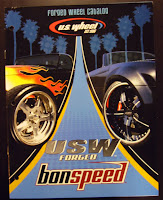 The new bonspeed Wheels catalog was so popular that we blew through thousands. The bold graphic theme was created by the team at bonspeed and everyone dug the new look.

The new catalog features the seven new styles we introduced at SEMA and features a few of the vehicles rolling on bonspeed wheels. 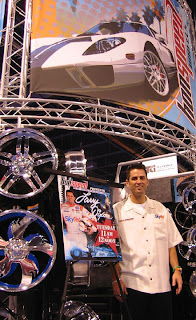 No party at SEMA is complete until the celebrities are in attendance. At the bonspeed Wheel booth fans could meet NHRA Top Fuel Champion Larry Dixon. Again in 2008 be sure to watch Larry's visor for the familiar bonspeed logo. Larry is a good friend of ours and the fans lined up for autographs and photos.

What is cooler than having the bonspeed designed and constructed 2008 GMC Sierra blasted across the big screen? The truck was displayed at the Sony Xplod display for the duration of the show, but GM kept the crowds in full view. 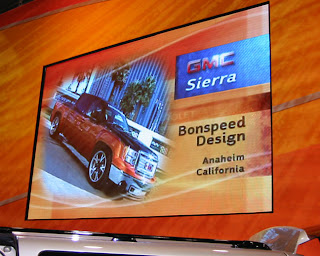 The bonspeed "King Sierra" went on to win the coveted GM Design Award!

The truck features one of our newest designs the bonspeed 22" Vector wheel. 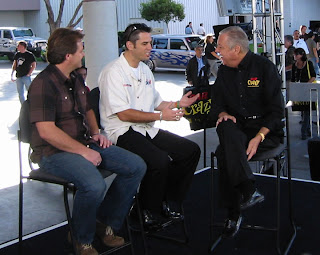 The two spoke with Barry about Larry's NHRA Top Fuel title chase, hot rods, bonspeed and the new projects that are being created at the bonspeed design studio in Orange County, California.

Watch for this interview as part of Car Crazy's coverage of the SEMA 2007 event. 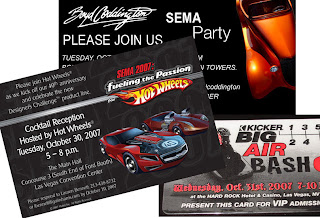 No mention of the SEMA show would be complete without talking about the parties!
SEMA is THE party of the year for car guys
and needless to say the bonspeed boys partake
in as many as we can.

So there it is another year of walking miles, talking and meeting friends, endless nights preparing and swearing we will never stay out so late on a tradeshow night...yeah we say that every year!

Hey see you in 2008 and thanks for representing for bonspeed!

Posted by bonspeed boys at 7:30 PM No comments: 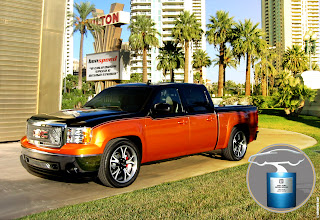 SEMA has grown to such a size that even a die-hard car guy can push overload! This is the show that has thousands of top quality cars, trucks and exotics. Industry heavyweights are rubbing elbows with auto executives and everyone is looking for that extra something...somthin'.

bonspeed "the california speed and design studio" and wheel manufacturer came to SEMA with seven new wheel styles, a new booth , a new catalog and a 2008 GMC Sierra. We left with tons of new business, some stories that are better left in Vegas and the GM DESIGN AWARD!

The GMC Sierra was designed and constructed at the bonspeed shop with some expert assistance from our partners. The truck arrived about five weeks before SEMA and we immediately tore it apart. After choosing the paint colors of; Dupont's Kandy Sunset with a Kandy Apple Red stripe over a black base we added the tan pinstripes. The paint was completed at L&G Paint in San Dimas, CA. The pinstripes were laid down by Theresa who has mad skills!

Thanks to all of our partners and the skilled people who assisted us in making the truck a reality.

Watch for our bonspeed "King Sierra" in leading magazines.

VISIT: bonspeedWheels.com
Posted by bonspeed boys at 8:28 PM No comments: 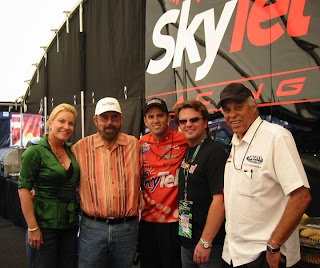 It was the final race of the year; NHRA's World Finals in Pomona, California. Larry Dixon the bonspeed sponsored driver of the Don Prudhomme Top Fuel dragster was in the top four and things looked great! Boyd and Jo Coddington joined Brad Fanshaw for a trip to the races. During round one we were invited to watch from the starting line, directly between the two thundering dragsters. Wow, what a rush horsepower and nitro.

Between rounds our hosts; Larry Dixon and Don Prudhomme took time for a quick photo. Even though Larry was unable to clinch a third top fuel title in Pomona there is some great news. The 2008 season will see Larry driving with the U.S. Smokeless banner, formerly Skoal.

Thanks to the Don Prudhomme team for a fantastic season, bonspeed is very happy to be associated with the team and Larry Dixon.
Posted by bonspeed boys at 10:27 PM No comments:

Hell Freezes Over at SEMA 2007 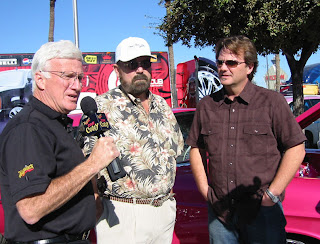 Brad Fanshaw and Boyd Coddington made big news at the SEMA show in Las Vegas by announcing that after eleven years they would again team up! One reporter asked if, Hell had frozen over? He referred to the fact that when the two split, it did not seem as they would ever reunite. Read more below from the actual press release:

Boyd Coddington Links Hot Rodding Past With the Future
Innovator, Fabricator and TV Star Teams With Former Partner
Anaheim, CA- October 16 2007- Boyd Coddington may be most commonly known today, as the under-the-gun, deadline-stomping star of “American Hot Rod”. Coddington’s on-screen persona may give the impression that he storms through and demands others to make the impossible happen. In fact, Coddington is a hot rod industry icon, that is more automotive stylist than drill sergeant.

The legend of Boyd Coddington and his now familiar and very copied look began in his backyard garage in 1976. The Disneyland machinist had an ability to execute his innovative ideas. It is his eye for color, textures and a smooth high-tech look that are his trademark. The first to machine aluminum parts and wheels for a personalized and functional approach, Coddington built a team to develop his dreams.

Coddington’s innovations have become not just hot rodding touchstones, but influences that have helped the entire aftermarket industry flourish. In the late 1990’s, as Coddington’s unique billet aluminum wheel line began to grow, he met a young car enthusiast, Brad Fanshaw. Fanshaw had just completed several years of growing a popular skate, surf and snowboard brand to huge success and sales exceeding $100 million. Coddington recognized the value of a true car enthusiast with ideas born from a cutting-edge industry and the business acumen to help his fledgling hot rod shop and wheel company.

The team of Coddington and Fanshaw is famous to some in the aftermarket industry and yet an enigma to many enthusiasts. Together, the two stormed the hot rod industry creating products, promotions, celebrity of some employees and most notably the industries first publicly held wheel company on NASDAQ.

Making the company an industry leader was due to the efforts of many talented people; however, Coddington and Fanshaw developed and executed the strategy. It was Coddington’s skill in the factory and the hot rod shop that kept things rolling. Fanshaw, the ever behind-the-scenes man promoted, marketed and created the mystic of the legendary brands while positioning the company for an IPO.

“We had most likely, the finest group of fabricators ever assembled under one roof. There was magic when we built a hot rod and I enjoyed every car that our shop constructed. Beyond the cars and products, it was the branding and innovative ideas that allowed us to grow.” says Boyd Coddington. The creative hot rod think tank kept turning out innovative cars, wheels, apparel and accessories.

“I believe Boyd does not get the credit he deserves, he is what I call a conceptual designer. He may not be able to draw or sketch his cars or ideas, but he is no less a designer. Boyd looks at a car or develops an idea in his head, sure someone else must draw it, but only so it can be executed. He is never credited with the open attitude in which he has tutored others like Chip Foose and Jesse James they were allowed the opportunities that provided them with a foundation for accomplishment.” states Fanshaw.

The business relationship between Coddington and Fanshaw split in 1996. The IPO took its toll on the working relationship and each went their separate ways; with Coddington continuing his wheel and hot rod business and most recently his fame on TV. Fanshaw applied his ideas and marketing skills in creating a Swiss watch manufacturing company before returning to the aftermarket industry with wheels, apparel and gauges.

At a time when Coddington’s star is as shiny as the billet parts on his custom creations, the hot rod legend is certainly not standing still. With television, corporate endorsements, licensing deals and a customer waiting list he is ready to create even more magic. So after no more than casual meetings at car shows or trade events in the last eleven (11) years, the two have announced that they are again working on some special projects, ideas and developing new business strategies.

“There are times when everything just runs perfect, no misfires or stalls and it is due to the team with who you surround yourself. I am certainly not taking a step back, but rather a leap forward while remaining true to the past. You know the best hot rods always blend the old and new. The combined knowledge, new ideas and positive influences of people like my wife Jo will allow me to embark on projects that before now were only dreams.” explains Coddington.

The Coddington Companies and the “Boyd Look” supplied a baseline for the aftermarket industry. Now after eleven years Boyd Coddington will team with Brad Fanshaw to bring a new generation of enthusiasts as well as loyal die-hard fans more Boyd magic.

About Boyd Coddington and The Boyd Coddington Company
Boyd Coddington is an internationally recognized automotive designer, builder, fabricator and television star. He is recognized as one of the winningest hot rod builders of all-time and has been included in many automotive Hall of Fames. The Boyd Coddington company is well-known for designing and constructing numerous show quality custom automobiles for celebrities such as ZZ Top and Michael Anthony of Van Halen. The corporations that have sought Boyd Coddington include Budweiser, White Cap, Sobe, Old Milwaukee Beer, O’Reilly Auto Parts and Hershey. With his name representing companies and products world wide it is not uncommon for the Boyd Coddington name to be found in most automotive stores. His trademark billet aluminum wheels the product that launched an industry are today manufactured under a license to American Racing.

For additional information contact:
bonspeedMedia at 714.666.1999 or visit www.boydcoddington.com
Posted by bonspeed boys at 10:15 PM No comments: