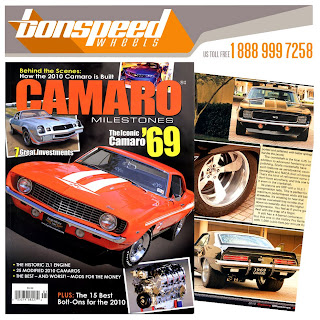 In the Spring issue of Camaro Performares magazine this fine pro-street Camaro is featured with our bonspeed "Huntington" style wheels. Pick up a copy to see the entire feature article and visit our website to see more cars with bonspeed wheels in our gallery section.

WEBSITE: bonspeedWheels.com
Posted by bonspeed boys at 1:37 PM No comments:

Status of Texas Bursts on the Scene with bonspeed! 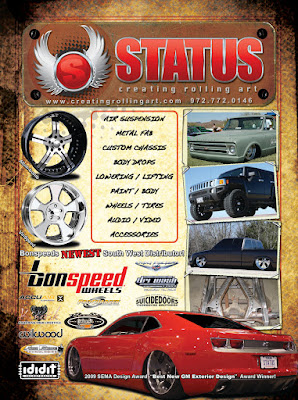 The guys at Status in Rockwall, Texas, just outside of Dallas have a new shop, new GM design award trophy and new ads. This shop is doing some pretty cool stuff like RedRum the slammed and VinSpeed wheel riding 2010 Camaro in the ad above.

Watch for their ads running in magazines and remember they are our newest bonspeed wheel distributor in Texas so call them for your wheel needs! You can check out the website at www. creatingrollingart.com.
Posted by bonspeed boys at 11:50 PM No comments: 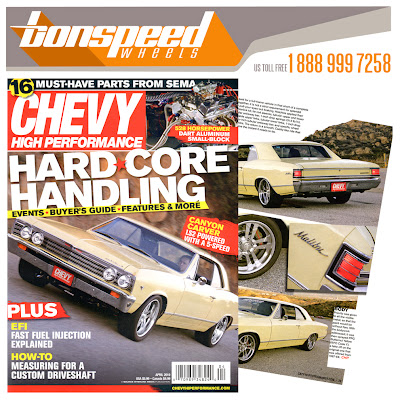 On newsstands now is the April issue of Chevy High Performance Magazine. The cover car a 1967 Chevelle is outfitted with bonspeed CLUTCH style wheels. The car has plenty of pro-touring goodies including Hotchkis suspension parts.

Grab the issue and check it out for yourself. You can also see some pictures of the car at our website gallery. 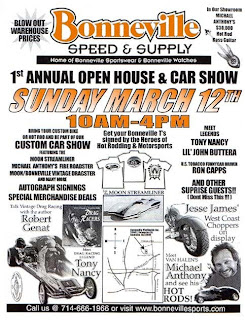 This was the greatest open house and car show So. Cal may have ever seen and certainly the best we ever hosted! It was 1997 and bonspeed was still called Bonneville Sports (our original name- Where the name bon originated).

We invited everyone to come by for an open house, show and party at our design studios. Just a few of the names that were on hand Tony Nancy, Don Prudhomme, Jesse James, Lil John Buttera, Ron Capps, Harry Hibler and many others. We had the Mooneyes streamliner, a Tony Nancy vintage dragster, a half dozen choppers that Jesse hauled over from his shop and lots of other famous cars too.

Good Times...we need to have another soon!
Posted by bonspeed boys at 10:52 AM No comments: