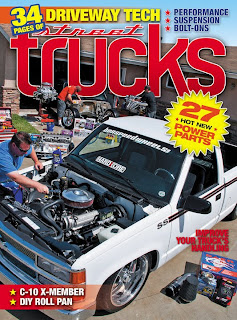 Travis Noack, Jason Mulligan and the guys at Street Trucks Magazine always put out a great magazine, but the upcoming issue above is by far the best! The look reminds us of the old street machine driveway shots from the 1980's.

Making the cover better yet are the two feature trucks. The just completed slammed Chevy in the foreground with the bonspeed windshield banner and S/S style wheels is Travis' personal ride. In the background is the on-going full frame C-10 of Brandon's. The C-10 is wearing bonspeed Huntington's.

Show the magazine some love and pick up a copy as soon as you see it on the shelves! A big thanks to the hard working crew at Street Trucks!

Visit bonspeed Wheels website
Posted by bonspeed boys at 11:22 AM No comments: 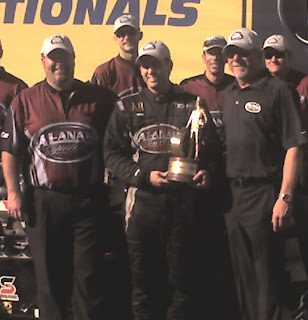 Larry Dixon captured Top Fuel win #8 last weekend in Sonoma, California. Already in the number one position, this win gives him a commanding lead. Sonoma, California is perfect in July and the win made the wine country even sweeter.

It was made even better because we were on-hand to watch Larry grab the Wally and the additional points towards the 2010 NHRA Championship.

As I mentioned above, we were in Sonoma for the Fram Autolite NHRA Nationals and bonspeed Girl; Charlotte was there too. During the awards ceremony Larry pulled Charlotte in the winners circle to hold his Wally Trophy and get a photo. Since it was her birthday, he also presented her with the coveted and rare Top Fuel winners hat. 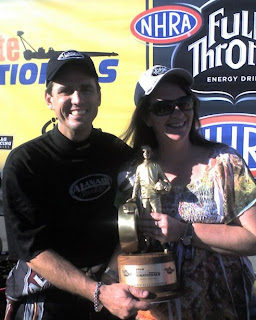 PICTURED BELOW:
Charlotte in the NHRA Winners circle with the Al-Anabi Top Fuel dragster and her Top Fuel Winner hat that Larry added a big Happy Birthday wish on the bill. If you do not know it already, this gorgeous lady is the real brains behind the bonspeed empire and keeps everything going smooth! 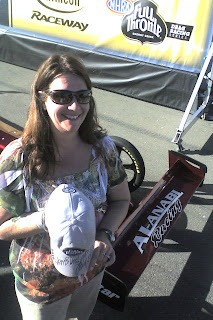 Way to go Larry and Happy Birthday Charlotte!
Posted by bonspeed boys at 5:17 PM No comments: